I could hear the bells, somewhere far away, echoes of the bells, even further away. I had never been here before. For the past two years, we used to go to La Chapelle’s bar almost every Saturday, but we never got into the restaurant. I had always imagined it would be romantic. And so it was, although it was located in a dull area of London. It was charming but different from what I liked.

There were fresh flowers by the door. White tulips, and lavenders, as far as I can remember. And a couple of small candles at every table. There were reflections of the flames in all the mirrors, in the perfectly polished spoons, and glasses. In the faint light, his eyes were twinkling as two little stars deep up there in the sky on a chilly summer night. We were two little stars that would soon come together and collide.

I was looking out the window, observing the streams of water and people watching, but no-one passed around. Maybe someone did, but I didn’t notice. The rain was so heavy that you could barely see the vibrant street art right across the street. The day felt like Ireland for me. Savage but lush, bittersweet like their Guinness. They said Fiddler’s Elbow had the best Guinness in the whole of Brighton, and I believed them. Only after a couple of years, I realised the pub had the best Guinness in the whole of England. We drank our pints and had two more. Then, we went down to the beach. We wanted to pick up some shells and chase the waves in the pebbly terrain. It was still raining, but I didn’t mind. We walked from the old pier to Hove and back. The waves were big and wild, mercilessly washing all the little stones to the ocean. Soon, the beach was empty. It was just him, and I, and the sea. I don’t like rain, but there I liked it.

‘What shall we eat? I kinda fancy fish or something, do you?’ So we ordered fish, scallops, and champagne. We talked about everything, the seafood, work, plans for the next week, and us. That was just what we did. Everything was splendid, only the fish didn’t go well with the mood and the music. To this day, I still don’t know why.

I remembered one winter night when we were sitting in Hope and Ruin, back there in Brighton, and the same kind of music was on. I was drinking sour beer, and he was having a cider. Their Guinness tasted funny, so we would never ask for it there. A desperate musician was playing a broken piano.

The first time we went to the bar, we ordered the same, sour beer and a cider. But we left with an impression that the place was rather a quirky one. It was too colourful, too bright, and too bluesy. The tables were made of old electronic board games. The DJ table used to be a fridge in its previous life. And there was this stern clown by the door. We thought we would never come back, but there was something about it.

After a couple of romantic serenades, the place got flooded. The draughts were crying beer, the couples who weren’t in love fell in love, and lovers loved each other insanely, almost fatally. We looked at each other and fled. We didn’t even finish our pints. That time I was left with an impression that he was the one.

Suddenly, I felt somehow offbeat, like if something had changed inside of me. I had never felt anything like that before. But I was always sentimental when I ate seafood, so I didn’t pay much attention to it.

I knew it was coming, so I asked him: ‘Honey, when did you realise that I was the one?’ He looked at me suspiciously and got slightly nervous. Then, he calmed down and responded with delight: ‘I remember it vividly. It was the day we saw that spooky artist in Hope and Ruin.’ I just smiled back and sipped a bit of my fizz. By that time, we had already finished the seafood, and I fancied a dessert. I ordered Spanish strawberries.

Not long before we met, I was back-packing around Spain, and I visited this town in Catalonia called Gerona. That place is out of this world. It is full of those little narrow streets where merchants sell homegrown food and local wine. Restaurants and cafes buy it and prepare it in various ways. I especially liked how they served it in a tiny family bistro Le Bistrot.

I don’t know if I liked it truly because of their spectacular cuisine, or because the restaurant was once ranked the most romantic one in the world. There, in particular, I always had strawberries and coffee after each meal.

A couple of streets away, there is a lovely little square by the river. In the middle of the plaza, there is a statue of a lioness. The local tradition says that if you visit Gerona and want to come back, you should kiss it. I wanted to see the town once again, maybe with someone special. So just in case, I did it. And in two years’ time, I came back with him.

We would sit in Le Bistrot on their terrace drinking cava and eating olives. We would go to the markets and buy flowers. The sun going up and down would fill our glasses, and we would smooch, caress, and kiss. And right before we left, we both kissed the lioness.

Once I ate the strawberries, I knew it was it. Lately, he would pay too much attention to my hands. He would hold them tight and study them visually. He would look so profoundly into them as you look into the liar’s eyes. I had always imagined this very moment. I looked around. I saw people eating and chatting, waving at waiters and indicating them to bring another bottle of their finest. The waiters were sweating in their snug fancy vests, running from table to table, and at each stop, they would try hard to read the customer’s mind. ‘Blueberry cake, ma’am?’ ‘Another martini, sir?’ Shortly, one of the waiters appeared behind us. And while both of our minds were wandering somewhere around, he knew he wouldn’t be able to make our wishes come true that night.

There it was, a precious ring in my glass. He didn’t say anything. He was just waiting for me, shaking, to say something. He wanted me to drink the champagne, put the jewel on, and see if he had chosen right.

As I said, I had imagined this moment many times, in various places, with different men, but I had never imagined it in there, in La Chapelle to which we had no bounds at all. And a ring in a glass? So I just stood up and left. At the door, I glanced at him for the last time, and I noticed a red spot on his white shirt right where the heart was.

I never saw him again, but I heard that from then on, he only wears red T-shirts so no-one would notice he was bleeding. He is somewhere there, my other half, my soulmate, waiting for me to answer, still trembling but knowing that I will not respond. We kissed the lioness, but we never came back. 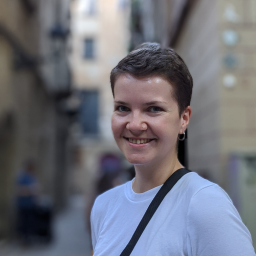